Secure the Dependencies of your Scala Project on GitHub

We released sbt-dependency-submission, a GitHub action that submits the dependencies of sbt builds to the GitHub Dependency submission API (currently in beta). This action, once installed in a GitHub workflow, allows you to view the Dependency graph in GitHub and to receive regular security reports from Dependabot.

A similar action for the Mill build tool, the mill-dependency-submission action, developed by Chris Kipp, is also available. Other solutions are available for Maven and Gradle as well.

The next sections explain the motivation behind this project, show how to get started, compare Dependabot and Scala Steward, and list similar solutions for other build tools.

GitHub Dependabot and the Scala ecosystem

Last year, the Log4j CVE reminded us of the importance of staying alert to security vulnerabilities. Fixing all known vulnerabilities once does not make your project secure, since critical vulnerabilities can always be found and exploited in open source libraries, even the most widely used ones. Being able to identify new vulnerabilities and to respond to them quickly reduces the risk of exposure to its minimum. But the task can be time consuming, unless we automate it.

GitHub Dependabot is an automation tool that helps us secure our projects. Its initial approach is to scan static configuration files such as POM files or package-lock.json files to extract the dependencies of a repository and cross reference them with a database of vulnerabilities. But some build definitions, such as build.sbt files, are programs that cannot be statically analyzed. A few weeks ago, GitHub released the beta version of the Dependency submission API, a REST API that we can use in CI workflows to submit complete snapshots of dependencies when they are resolved at build-time.

As a large part of the Scala community uses GitHub to host their projects, we developed sbt-dependency-submission, a GitHub action that can extract the graphs of dependencies of sbt projects, for Dependabot to analyze them and report any vulnerability. With this tool, we hope to contribute to building a more secure Scala open source ecosystem.

Setting up the workflow

Before installing the dependency submission action, you need to ensure that the Dependency graph view is enabled in the Settings > Code security and analysis tab of your GitHub repository. You should also consider enabling Dependabot alerts. 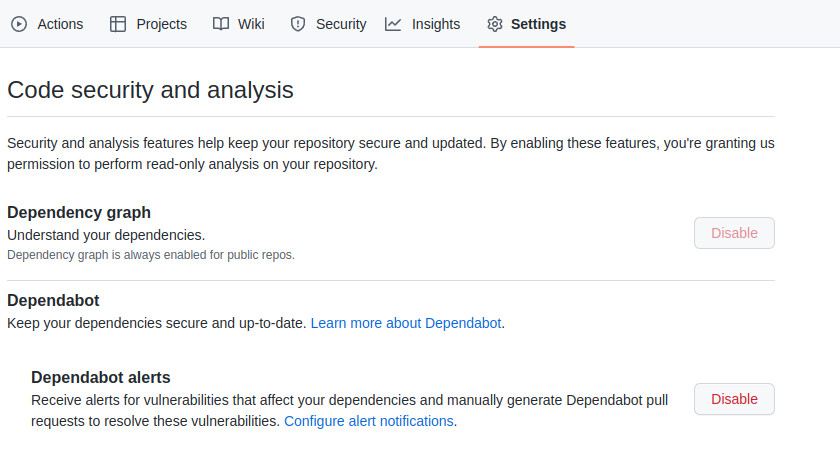 To install the action, add a new workflow in the .github/workflows folder, with the following definition:

This default definition should work in many sbt builds out-of-the-box. Given a valid sbt build, the action installs an sbt plugin that will extract all transitive library dependencies from all subprojects on all Scala versions.

For troubleshooting, please refer to the documentation of the action.

Scala Steward is a tool that helps you keep the dependencies of your project up-to-date by opening pull requests on GitHub (and other hosting services). It is used in more than a thousand open-source repositories and many proprietary ones and contributes to a large extent to the security of the Scala ecosystem.

Dependabot and Scala Steward can be used as complementary tools. Scala Steward, as a preventive tool, can help you keep your dependencies up-to-date, which reduces the risk of security vulnerabilities. Dependabot, as a monitoring tool, can notify you when a vulnerability is found, so that you can act quickly.

Dependabot can also send PRs to update dependencies, but in static configuration files only. It can update the actions in your GitHub workflows, or the Maven dependencies in your POM files, but not the dependencies in the build.sbt or build.sc files.

You can use Dependabot with other Scala-compatible build tools.

Dependabot supports Maven through static analysis of POM files. You can enable the Dependency graph view and Dependabot in the Settings > Code security and analysis page.

The mill-dependency-submission action, developed by Chris Kipp, can extract the dependencies of a Mill build.

Gradle users can use the gradle-dependency-submission action.

In GitHub, it is now possible to use pre-made actions, like sbt-dependency-submission or mill-dependency-submission, to extract full graphs of dependencies at build time. This allows Dependabot to analyze the dependencies and publish regular reports of vulnerabilities. Only project administrators, organization owners and users with explicit access can see the Dependabot reports.